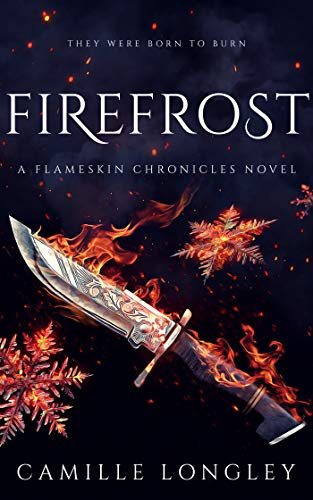 She’s a huntress: Sol d’Hillerod is sent on a desperate mission through a treacherous winter pass. She carries with her the only hope of her village’s survival, and she will do whatever she must to keep her world from burning.

He’s a monster: Lieutenant Kelan Birke has spent his whole life fighting for his freedom and his soul. As his control slips, and the war rages on, he knows it won’t be long before he loses himself entirely to the fire that flows through his veins.

Sol and Kelan are enemies in an age-old war, forced to depend on each other to survive a perilous journey through the mountains. As fire melts the ice in Sol’s heart, she questions everything she’s been taught to believe, and Kelan becomes more desperate to fight the flames that consume him. Together they discover that their struggle will have repercussions for both sides of this burning war.

This stunning debut is perfect for fans of Sabaa Tahir and Sarah J. Maas.

Two people were destined to be together, yet doomed from the start.

In Firefrost by Camille Longley, we witness a few ugly human characteristics play out in a fictional fantasy setting. Sol is a girl born in a small mountain community and is led to believe that the “Flameskin” people are evil from birth, long before they even begin to display their affinity for fire. Kelan is a boy born with what he feels is a curse – the ability to wield fire. He agrees that it’s a dangerous trait, but he can’t help how he was born. It’s immediately clear that they’re both born and raised to be enemies without a chance at civility between them.

Sol and Kelan cross paths when Sol, posing as a man, is leading a princess and her guards through the dangerous snowy mountains. Known to the princess and army men as “Hunter”, Sol is their leader on the dangerous journey because of her expertise in the mountains. Her status in the village was once held by her father. Since the passing of her father, Sol has been the provider for her family and thus poses as her father to keep the job.

We are human first. We’re not as different as we think.

A common theme throughout the book is Kelan’s desire to be seen as a human and not a demon. There are many Flameskins who have committed tragic offenses against villagers; yet, there are terrible humans who have murdered their people as well. The basic nature to protect their own by harming others actually makes them the same while they’d like to believe they’re very different.

The build-up of Sol and Kelan’s love worked well because it took natural stages. At first they were just civil with each other for survival. Then they started to warm up to each other and became allies. Friendship and love built upon those stages. It wasn’t a quick jump to love that we tend to see in YA books. Thereafter, Camille Longley provides multiple stages of conflict among Kelan and Sol. Love is never easy after all.

I enjoyed this story of love, danger, and compromise very much. Sol and Kelan work hard to see past what they were raised to believe. It’s even harder for them to try to influence their own family and friends. Needless to say, trying to end a war between Sol’s people and the Flameskins seems impossible but necessary. In Firefrost nothing is ever easy, and no step that is taken comes without a personal price to Sol and Kelan.

The Valentine by Denise Grover Swank