For Ben Vecchio, everything has changed. His eyes. His diet. His new aversion to sunlight. But after a long sojourn in China, Ben realizes that the world he left behind hasn’t changed as much as he feared. He wants to leave his old life in the past, there’s one job remaining that just won’t leave him alone.

Radu’s mystery is too interesting—and too profitable—to ignore. The problem? Taking on this commission puts Ben in the path of his old partner, the one woman he’s spent years avoiding.

Tenzin has been following Ben at a distance, hoping his ire might wane, but when he heads to Romania, her patience runs out. Ben is a new power in their world, and more than one vampire will be eager to test him.

Ben and Tenzin need to work together if they want to find the truth behind Radu, his mysterious clan, and the treasure at the heart of the Dawn Caravan. One last job, then it’s finished between them.

Warning: While I want to deliver a spoiler-free review, that’s gonna be hard, so be prepared that I am going to let a little bitty kitty out of the bag. That being said, it won’t be wholly unexpected if you’ve been reading the series.

The Dawn Caravan arrived on my Kindle and I salivated over it while completing some other projects.  But as a loyal member of Elizabeth Hunter’s 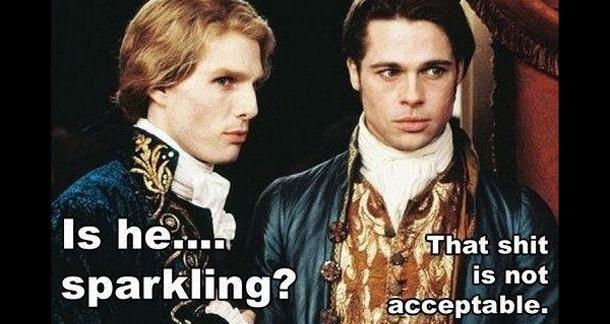 Haven, I certainly couldn’t ignore it, now could I?

When we left Tenzin and Ben (and the rest of the crew), Ben was training with his new sire, and it seemed everything in our tender little world was upside down. Ben was angry and betrayed, Tenzin was nonplussed by his rage (or was she?)

It was dark times, to say the least. But finally, just when we thought Benzin might be no more, the breaking dawn. (No, no sparkly vampires! Wrong vampire book 😉 )

The Dawn Caravan is ready to take you away to all the places you’ve been longing to go.

While, of course, EH delivers a delicious mystery shrouded in historical and cultural references, she also brings it in the sexy department. Ben and Tenzin arrive on the scene in all their obstinate glory, full of thinly-veiled desire. While searching for a stolen emerald goblet, they traverse Eastern Europe and Romani culture to solve a robbery – while working to curtail their libidos.

You can guess how that ends.  I won’t tell you what happened, but Kezia probably has the right idea. (That will make more sense when you read it… and you should totally read it.)

Absolutely worth noting is that the dialogue in this book involving Tenzin is laugh-out-loud funny at parts, and totally endearing in others. Hunter nails humanizing our favorite millennia-old vampire in fun banter involving everything from Ben to broccoli.

There’s also visits from old friends, and we definitely will be seeing Brigid and Carwyn soon.

So, ya. This book. I have no idea how Elizabeth Hunter comes up with all the amazing storylines and plot points she does, all the textured characters and rich cultural references. But she never misses a beat – never skips a step. While I found it slightly hard to get into at the onset, I was gripped completely by 20 percent and didn’t go to sleep until it was done.

It’s that good. Grab a snack, a comfortable spot in the hammock or your favorite comfy chair and find yourself transported to Bucharest, Kashgar and Venice. She’s just that good.

If you haven’t started this series, you can jump in from Midnight Labyrinth, or start from the very beginning of the the Elemental Mysteries. To start from the beginning, here’s Hidden Fire to get you started (it’s free!!!):

The Aviary by Emily Shore

Cinderella is Dead by Kalynn Bayron

Dating the Billionaire by Poppy Dunne