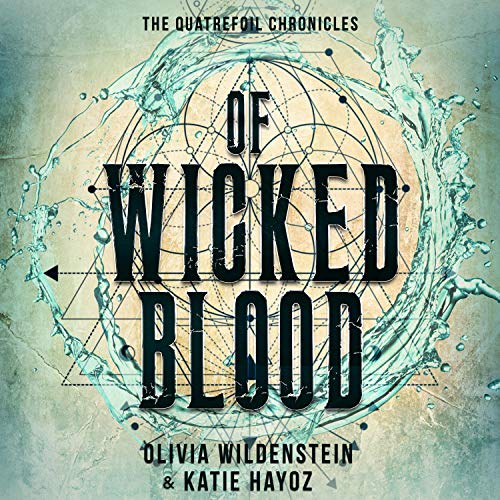 NO REST FOR THE WICKED … OR THE CURSED. SLATE I didn’t mean to steal the Bloodstone from the de Morel’s crypt. Scratch that, I did mean to steal it. Until I realized it was a curse-magnet that only comes off if I, along with a jolly trio, successfully defeat four curses. If any of us fail, I’m dead. I’ve never been a glass half-empty sort of person, but my glass looks in dire need of a refill right about now.The only highlight of this wicked treasure hunt: feisty, entitled Cadence de Morel. CADENCE I was raised on tales of magic, in a small town reputed to be the birthplace of French witchcraft. Did I believe all the stories I heard? Absolutely not. I mean, if magic existed, Maman wouldn’t have died, and Papa wouldn’t be stuck in a wheelchair, right? Wrong. The night Slate Ardoin waltzes into my life, wearing a ring he stole from my mother’s grave, I call him a monster. But then I meet real ones, and Slate, well … he becomes something else to me. Something frustrating to live with but impossible to live without. Something I will fight for, no matter the cost.

In Of Wicked Blood, a young man named Slate Ardoin is persuaded to return to a small town that he didn’t realize was his first true home. Having grown up in the foster care system, 20-year-old Slate found family with a foster brother named Bastien. Hardened by his childhood in an imperfect system, Slate has dragged himself out of poverty and into wealth. Not all of his efforts were “above” the table. Even so, everything he has to his name, he earned. So when he receives a letter stating he’s the heir to a large inheritance, he’s shocked… then he’s pissed.

Cadence de Morel, a young woman who’s lived in Brume her whole life is meets Slate Ardoin by chance. Her first impression is not a good one, and it takes a bit of work on his part to get into her good graces. Having lost her mother at just one year old, Cadence didn’t know her mom was buried with a magical ring. She soon discovers this when Slate presents the ring as a curse stuck on his hand. While she should hate Slate for robbing her mother’s resting place, she ends up working with him, a professor, and a local mother, to recover four magic leaves of a mystical quatrefoil. Her father, an influential man in Brume only wants the magic restored, but Cadence is committed to the quest to keep the cursed ring from stealing Slate’s life.

Of Wicked Blood is quite wicked, indeed!

As told in the synopsis, the cursed ring triggers four magical quests for each element: water, air, fire, and earth. This is where the story gets very interesting. The magic both surprises and deceives them at each challenge. Slate, Cadence, Adrian, and Gael can support each other but they can’t truly help. To interfere can cause them all to fail, and ultimately die. It’s around this time that readers start to wonder why they should bring magic back. The founding families broke it apart into the four separate pieces, and each piece is trying to kill them!

There is so much to be suspicious of in this book. It’s clear that the older generations of Brume know and believe certain stories about the old magic. While Cadence’s father, Adrian, and Gael want to see it returned to Brume, their are other elders who believe it to be a curse to avoid. Her father kept the entire truth of magic and her mother’s death a secret for 17 years, yet he was preparing Adrian and Gael for this battle in secret. Why? He doles out information in little bits, piece by piece, clearly alluding to dark secrets. Cadence discovers a huge lie of her father’s on her own, but the whole city breaks into chaos before she can discover his motives. Daddy is definitely not the sweet saint that he portrays to her.

The narration for Of Wicked Blood was top-notch!

I was able to listen comfortably at 1.3x speed and still feel the emotions in each characters voice. There’s a gruff huskiness to Thomas Locklear’s portrayal of Slate Ardoin. You can’t help but giggle and shiver sometimes when he’s using foul words, or flirting with Cadence.

Of Wicked Blood technically ended on a cliff hanger, but with an added epilogue. That kind of doesn’t make sense, I know. But the story ends without an explanation to the single most pressing issue. My jaw dropped, and I was grateful that book two is already released on audio so that I can jump right in.

Right now, this audio books is only $1.99 on Chirp! I don’t get any affiliate credit for sharing this book.

Come on In by Adi Alsaid

One and Only by Nora Everly

The Heartforger by Rin Chupeco

The Ruthless Gentleman by Louise Bay