These Hollow Vows by Lexi Ryan

Brie hates the Fae and refuses to have anything to do with them, even if that means starving on the street. But when her sister is sold to the sadistic king of the Unseelie court to pay a debt, she'll do whatever it takes to get her back—including making a deal with the king himself to steal three magical relics from the Seelie court.

Gaining unfettered access to the Seelie court is easier said than done. Brie's only choice is to pose as a potential bride for Prince Ronan, and she soon finds herself falling for him. Unwilling to let her heart distract her, she accepts help from a band of Unseelie misfits with their own secret agenda. As Brie spends time with their mysterious leader, Finn, she struggles to resist his seductive charm.

Caught between two dangerous courts, Brie must decide who to trust with her loyalty. And with her heart.

All Vows Lead to Death

These Hollow Vows is the first book I have read by Lexi Ryan, and it has easily landed her on my list of must-read authors. The world building is intricate, yet subtle, and her characters are all the beautiful shades of grey that make for a twisting, and unexpected story arc. Magic abounds, along with plenty of courtly intrigue, and romances that are steamy but not spicy (a plus in my opinion– I’m a prude, but do appreciate a sweet love scene). The action is constant, building the mystery of who Brie really is, and why she is so important to the Fae, ending with some major plot switchbacks and one heck of a cliff hanger, that throws everything you thought you had figured out about where the story was headed into question. 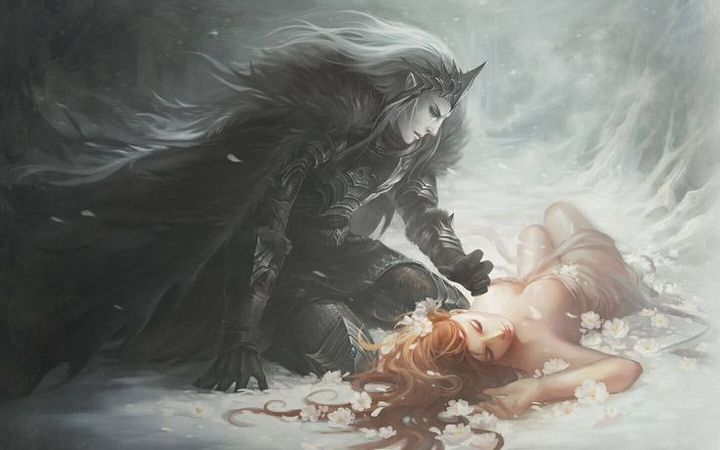 The mythology surrounding the split between the Seelie and Unseelie courts of Faery is familiar to readers of fantasy, and Ryan keeps with the basic tenets of this plot as the backbone of her story. Where she diverges is in the question of how the courts could be united into one, and what a seemingly mortal girl could have to do with this solution. As Brie searches for her kidnapped sister, while simultaneously trying to learn mastery of her peculiarly dark magic, and figure out the will of her treacherous heart, clues to how she could be the key to the fate of Faery are slowly laid out, only to be snatched away at the last possible moment. Brie’s romance with the Seelie prince, and undeniable pull towards the Unseelie prince is predictable for this type of book, yet neither seems stale or trite; they even avoided making me roll my eyes at the antics of the poor girl caught in the middle of two hot, powerful males.

‘I don’t hope. It’s a waste of time. Dangerous even.’ He tilts his head to the side. “You’re wrong about that. What’s truly dangerous is not having hope.’ — Brie and Prince Ronan

Brie is indeed a girl who seems not to hope, she allows all of her hope for the future to live in her love for her little sister, whom she once saved from a burning building. So when she learns that the key to using her magic may be in learning to hope, she is forced to adjust the way she looks at the world, and how she evaluates her relationships. Is saving her sister more important than the fate of an entire race of people? Is she willing to sacrifice herself and her new-found romance and friendships for one life? How Brie answers those questions reveals her true nature, and why she is so important to some of the most powerful magical beings in the world. But in vowing to love one of those beings forever, she finds out how hollow her knowledge of love and hope might really be. I highly recommend pre-ordering These Hollow Vows today, I need some company as I wait (with great anticipation) for the sequel!

The Recovery Agent by Janet Evanovich

The Trade by Meghan Quinn