For a hundred years, the once-prosperous kingdom of Perin Faye has suffered under the rule of the greedy and power-hungry Thungrave kings. Maralyth Graylaern, a vintner's daughter, has no idea her hidden magical power is proof of a secret bloodline and claim to the throne. Alac Thungrave, the king’s second son, has always been uncomfortable with his position as the spare heir—and the dark, stolen magic that comes with ruling.

When Maralyth becomes embroiled in a plot to murder the royal family and seize the throne, a cat-and-mouse chase ensues in an adventure of dark magic, court intrigue, and forbidden love.

Free the Magic, Free the Kingdom

The land of Perin Faye was once prosperous and idyllic, under the reign on the magic- wielding Dallowyn kings. As one would expect, eventually jealous stirred in the hearts of men over the Dallowyn family’s exclusive claim to magic, and therefore to the throne. Through treachery, some of the magic was stolen by the Thungraves, who then began to rule Perin Faye with an iron fist, exacting heavy tithes, and leaving most outside the palace walls and lord’s manors, to barely scrape

by. If we see magic as simply a source of power, The Stolen Kingdom gives credence to the old saying, absolute power corrupts absolutely; as the Thungrave heirs successively find out as they claim their stolen birthright of magic, and it places  its heavy yoke of power upon their hearts. Alac Thungrave is the first of his family to be suspicious of the magic, and its hold over the Thungrave kings. He begins to wonder if his family could  be better rulers without the rot of the magic upon their souls. At the same time, Maralyth Graylaern is embarking on a quest to regain the throne, and restore the Dallowyn line. There’s just one problem: she can’t bear the thought of Alac being killed alongside his father and brother, to pave the way for her own ascendency.

The Stolen Kingdom explores the themes of political corruption, and the dark side of men, through the lens of stolen magic. Ultimately, readers see that the hallmark of a great ruler is that they must care more for their people than they do for themselves, and more for the land then they do for their own 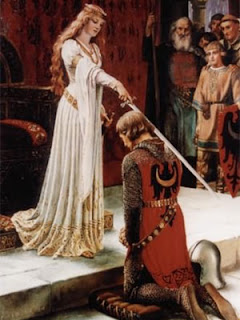 economic gain. The arc of the relationship between Alac and Marylyth is done with skill, never seeming unlikely or overly sappy. They are two strong characters, with stubborn streaks, who find common ground in caring for their people and country, while also being unable to ignore the spark of passion and soul recognition that exists between them. Overall the book is well paced, and well detailed, with a few plot twists meant to keep readers guessing about who will survive and under what conditions that survival will be, until almost the very end. While there are a few bloody scenes, the violence is kept at a minimum, focusing more on political pressures than warfare. And while some sections seemed to stretch out for a few too many pages, it is still an entertaining and fast read. YA Fantasy lovers will find plenty to be enamored with in this book.