You Can Hide by Rebecca Zanetti 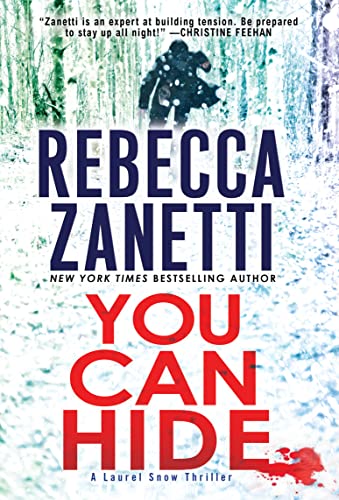 Perfect for fans of Laura Griffin and Kat Martin, the New York Times bestselling author’s thrilling suspense series follows an FBI Special Agent as she strives to navigate her complicated family life when her newly discovered sociopathic half-sister becomes the target of a dangerous killer. The Blacklist meets The Profiler in this fast, page-turning novel that will have readers guessing until the very end! What do you do when a sociopath loves you? Rising star FBI profiler Laurel Snow is about to find out … Calling Laurel Snow’s relationship with her newly discovered half-sister challenging is an understatement. Not only does Laurel suspect Abigail is behind the mysterious disappearance of their father, but her erratic behavior also makes life in Laurel’s small hometown interesting, to say the least. Still, when Abigail claims someone is now out to kill her, Laurel’s instinct to protect her sister goes into overdrive. Then things get even more dicey as dead bodies start turning up in the icy waters of the Sauk River and there’s only one connection among them: Abigail . . . Having Fish and Wildlife Captain Huck Rivers bringing in those bodies with his dive team only complicates matters. Huck is as impulsive and fiery as Laurel is coolly analytical, which makes their alliance risky at best. But standing up to such a demonically brilliant killer is going to take all the help Laurel can get. Because Laurel’s attempt to save her troubled sister’s life might cost her own . . .

Laurel Snow doesn’t get much of a break from crime before she’s on the chase for a new serial Killer in her hometown. You Can Hide is the sequel to You Can Run. Both are based in a small town just outside of Seattle Washington. It’s definitely strange that a small town would be plagued by two sadistic killers in a short span of time. There’s definitely more to this story that is just out of our reach from the very start.

At this point, Laurel still isn’t sure if she will stay in Genesis Valley, or move onto a bigger city’s FBI task force. Her team and field office are still in temporary mode which doesn’t slow them down. Someone is leaving women dead in the snow surrounded by dark flower petals. Who they are, and how they’re left outside is not done by chance. Someone is angry, and they’re on the hunt in Laurel’s town. The search for a serial killer is the obvious story plot, but the greater mystery is what this killing spree has to do with Laurel and her half-sister Abigail.

We need more of Huck and Laurel!

While Zanetti knows her way around a thriller, she’s definitely known for being a steamy romance writer. I appreciate that she sneaks in a romantic storyline for Laurel and Huck. There’s a whole song and dance going on between them while they investigate this case, together. It’s amusing to follow because of Laurel’s inability to read Huck’s social cues. Her beyond-genius brain is very literal and precise. This leads to funny misunderstandings, and several moments were Huck learns to avoid sarcasm at all costs.

You Can Hide by Rebecca Zanetti is a non-stop page turner. We mostly stay in Laurel’s perspective while following through on leads, but we do venture into the mind of the mysterious killer as well. Just when you think you have the killer pinned, Zanetti surprises us all. It’s never an obvious answer with her, and the ending is just not enough. When You Can Hide came to close, I was desperately trying to swipe for more pages. I have so many questions, and yet I’m totally satisfied with this book.

You can view my review for You Can Run, here.

Not Fooling Anyone by Allie Winters

Do Over by Serena Bell

The Most Likely Club by Elyssa Friedland