You Sound Like a White Girl by Julissa Arce

The Case for Rejecting Assimilation 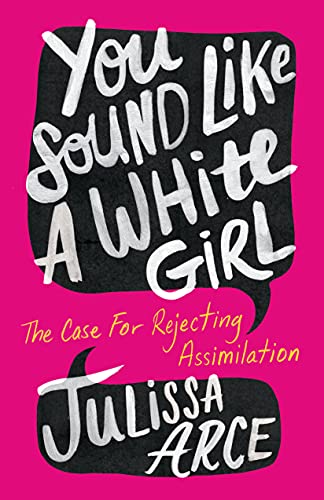 “You sound like a white girl.” These were the words spoken to Julissa by a high school crush as she struggled to find her place in America. As a brown immigrant from Mexico, assimilation had been demanded of her since the moment she set foot in San Antonio, Texas, in 1994. She’d spent so much time getting rid of her accent so no one could tell English was her second language that in that moment she felt those words—you sound like a white girl?—were a compliment. As a child, she didn’t yet understand that assimilating to “American” culture really meant imitating “white” America—that sounding like a white girl was a racist idea meant to tame her, change her, and make her small. She ran the race, completing each stage, but never quite fit in, until she stopped running altogether. In this dual polemic and manifesto, Julissa dives into and tears apart the lie that assimilation leads to belonging. She combs through history and her own story to break down this myth, arguing that assimilation is a moving finish line designed to keep Black and brown Americans and immigrants chasing racist American ideals. She talks about the Lie of Success, the Lie of Legality, the Lie of Whiteness, and the Lie of English—each promising that if you obtain these things, you will reach acceptance and won’t be an outsider anymore. Julissa deftly argues that these demands leave her and those like her in a purgatory—neither able to secure the power and belonging within whiteness nor find it in the community and cultures whiteness demands immigrants and people of color leave behind. In You Sound Like a White Girl, Julissa offers a bold new promise: Belonging only comes through celebrating yourself, your history, your culture, and everything that makes you uniquely you. Only in turning away from the white gaze can we truly make America beautiful. An America where difference is celebrated, heritage is shared and embraced, and belonging is for everyone. Through unearthing veiled history and reclaiming her own identity, Julissa shows us how to do this.

It took me a while to figure out how to review such an important book.

I was drawn to this because of its title, You Sound Like a White Girl. Growing up “half Mexican/half white,” being told I sound like a white girl was a mockery, not a compliment. For Julissa, it was intended to be a good thing but naturally she knew it wasn’t. She was being told that she can assimilate to societal standards well, and to be grateful for that. I was being told that by having a white father that I wasn’t Mexican enough, which only made me want to embrace that side of me more. Even if I didn’t understand how.

Arce tells readers her experience as an immigrant that overcame the giant hurdles to American citizenship. It wasn’t easy in a literal sense of documentation and legal obligations, but it also was troubling mentally. She breaks down the ways that she was told directly and indirectly that to be accepted was to be a legal American, with a great job and a steady income. That’s the dream. No one told her that when she got there on Wall Street, she still wouldn’t be enough because she’s not white. People look at her and wonder what kinds of scholarships she must have received to get there. It’s assumed that she must have been part of an Affirmative Action hire. Sure, some people will not believe that kind of mistreatment happens. Again, this is her story. A lot of people will relate to this and feel seen.

There are important American and Mexican history lessons.

I won’t try to retell all of the eye opening historical references from Arce, but I will mention that I’m one of the people who didn’t realize that when the American border was drawn, Native Mexicans were trapped in America. You’d think that means citizenship, but it did not. They were other. The census was created to further classify them away from “white”. The state of California didn’t desegregate schools until 1947! Mexican children were put in separate schools for “their own sake”.

I could go on and on about all of the injustice documented in You Sound Like a White Girl, but instead I’ll end on the positives. Julissa Arce reached a high level of success in part to assimilation. She assimilated so she could go by unnoticed while she was still an illegal citizen. As an adult, she’s reached the point in her life where she could let go of the American “dream job” to be true to herself, and use her influence to help others with similar stories. It’s difficult I’m sure to put herself out there so publicly and stand up to racial bias from fellow authors at events. I admire her courage to challenge societal norms and give a powerful voice to many.

I’m grateful for the opportunity to read this book. It opened my eyes to some of the ways my own family has been mistreated, and where the ignorance stems from. I think the people reading this book will find something of value to apply in their own life. I’ve recognized some of the ways I’ve assimilated and now I’m consciously trying to undo some of that damage. Even the little moments standing up to coworkers can have a big impact. I’m reminding myself to stay brave and not stay quiet.

Set On You by Amy Lea

Engagement and Espionage by Penny Reid