Forged in Fire by Juliette Cross 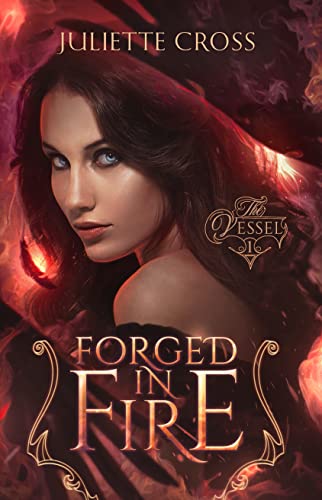 She didn't know the demon world existed. Now she just wants to survive it.

Genevieve Drake has never been the helpless kind of girl. Never needed a man to come to her rescue. That is, not until her twentieth birthday when some dude nearly chokes her to death in an alley and a hot stranger splits the guy in half, rips a monster from inside, and incinerates it into ash.

The hot guy? Jude Delacroix—Master of Demons. Now her guardian, whether she likes it or not. But she’s seriously beginning to like it.

The dude choking her? One of many demons from the underworld trying to abduct or kill her. As the prime target of the demon prince, Danté, who has all kinds of lascivious and sadistic plans, she has no problem accepting Jude’s protection.

Why Genevieve? She’s a Vessel, one who is born to serve the Light but can be corrupted and used as a weapon for darkness. Until that fateful night, she had no idea this world even existed. Now, she just wants to survive it.

Forged in Fire is a dark-fantasy romance series that I’ve found myself hooked onto. Having read Juliette Cross’ later works, I knew I’d be in for a broody-meets-sexy man with strong protective instincts. I didn’t expect the harsher topics within the story including attempted assault and reference to a suicide that precedes this story. While I can’t say I enjoyed these moments, they were influential to the story. Cross handled them with care and respect. Real life is not a walk in the park, and the growth we see for her characters is no different.

Once a Vessel, always a Vessel.

Genevieve is your average college girl with a more than average stature. She’s tall, she’s intelligent, and she’s a master at Karate. If a demon were looking through applications for a vessel to possess, Genevieve would be at the top of their call list. She is of course shocked when a handsome and mysterious man explains that she’s a vessel for any demon who wishes to posses her. She’s compatible to host a demon at their will. The only thing keeping a demon from taking control of Genevieve is her “untainted” soul.

The idea that virginity determines the goodness of a person is a big bowl of bologna. That said, I understand the use of virginity as one of the “sins” that would taint Genevieve’s soul. The creation of vessels and their purpose on earth is ancient; therefore, it’s totally suited for sex to be considered a deadly sin. It’s also the perfect setup for super frustrating sexual tension between Genevieve and Jude.

Jude is hot, protective, but far from perfect.

Jude has quite a temper on him. He’s been fighting the demons alone for way too long. He has a grumpy man exterior, but on the inside he’s all gooey for Genevieve. I like the power balance between them. Jude is the almighty force in their relationship; however, Genevieve develops into a stronger vessel than anyone could have predicted. She can also kick ass as a human. She’s no delicate flower sitting around for Jude to rescue. Jude is always there, always ready to protect, yet Genevieve tends to rescue herself quite a bit too. I really liked that about this storyline. They grow to really like it too, but her virginity is one of the keys to protecting her soul.

The only thing holding me back from a perfect 5 stars is how the conflict was handled between Jude and Genevieve. He said something to her about her deceased mother that was really harsh. There wasn’t enough explanation, and not a good apology.

Will I read the next book? ABSOLUTELY! Genevieve is getting stronger, but she’s not out of danger. I need to know if she can finally come into her full power and also get laid! I’m all for a steamy love scene for her and Jude!

The Brazen by Willa Nash

The Sweetest Remedy by Jane Igharo