What the Cat Dragged in by Kate McMurray 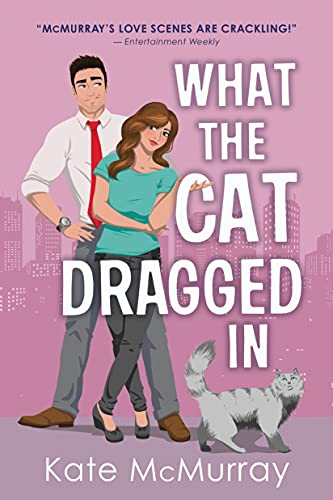 Set in Brooklyn (with a small-town feel in the big city), this cat café romantic comedy has tropes readers will adore:

When Paige Danvers isn't managing events for the Whitman Street Cat Café, she is busy navigating dating disasters as a single woman in Brooklyn. Urged by her boss and best friend Lauren to find a distraction from ineffectual dating apps, Paige volunteers with a cat rescue organization, where she actually meets a guy with some real relationship potential.

Recent law school grad Josh Harlow is putting in long hours at a Manhattan law firm as he gets over a messy breakup. When his boss requires him to do some volunteer work, Josh's sister sets him up to help capture feral cats. Partnered with Paige, Josh is insistently drawn to the dynamic event planner and sparks between them fly.

One problem: after a steamy night together, Paige discovers Josh is Lauren's brother and dating him would be a spectacularly awful idea. Particularly considering Paige's track record. They're both in too deep to walk away—but if they let the cat out of the bag, it's going to wreak havoc with friends, family, and jobs alike.

I don’t generally find myself reading RomComs, but I am always down to change things up. I knew going into this that there was bound to be a level of cringe, so I tried to get myself in the right state of mind. Surprisingly enough, it wasn’t an unbearable amount, but just enough to make me feel like I was reading a Hallmark movie. There’s nothing wrong with Hallmark movies, but at the end of the day, you pretty much know how they are going to go, and it’s never anything deep or of great substance.

I think the backbone of any good RomCom has to be overused tropes, and this book definitely uses those. It is the second in a series (whose first book was honestly hard for me to get through it was so cheesy) but other than some overlapping characters, they could also be stand-alones. This second book had secret dating, and basically the whole plot was driven by miscommunication. I was pleasantly surprised by it though. After not loving the first one, I thought this book was going to be slightly more painful. It sadly lacked in spice, but it made up for it in cuteness.

One of the most interesting aspects of this book was the perspective shift. It wasn’t shifting from person to person, but the 3rd party narrator was almost shifting from telling the story from Paige’s POV to Josh’s. I think this was a really great way to get both sides of the story, but Josh’s side of the narration deeply feel like it was written by a man, despite the fact that this book was written by a woman. I felt like the author tried really hard to make it sound like it was really from a guy’s mind, and so the way he talked about Paige’s body made him sound like a horny 14 year old boy.

Though, in the end, I did not come out of this book feeling like I had just read the next great love story of our time, I did enjoy myself. It was a cute, easy read, and exactly what I expected to get out of a RomCom. Though I wish there had been more than one highly disappointing spicey scene, it was still rather enjoyable (maybe it’s just me, but I always expect some spice with my cringe). This would be a great book to read if you want to take a break from more complex books, or you just need something to read to pass the time.

The narrator for this book was Suehyla El-Attar Young, and she did a fairly good job of it. I could tell she tried to give the characters their own voices, but after a while they all sort of sounded the same. There was one character who was given a very strong New York accent, seemingly out of nowhere, but I wish there had been more accents or voice distinction throughout.

The Wives by Tarryn Fisher

One Moment Please by Amy Daws