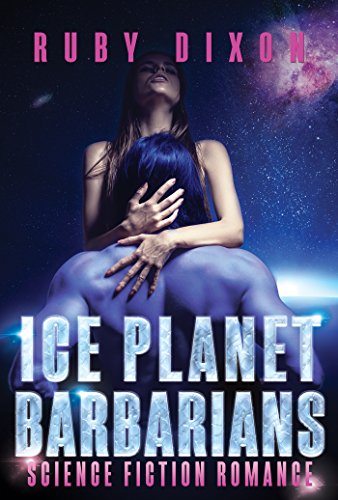 You'd think being abducted by aliens would be the worst thing that could happen to me. And you'd be wrong. Because now, the aliens are having ship trouble, and they've left their cargo of human women - including me - on an ice planet.

And the only native inhabitant I've met? He's big, horned, blue, and really, really has a thing for me...

Thanks to TikTok fame, Ice Planet Barbarians will be reprinted with a new cover design November 30, 2021.

Two friends told me (long before it’s tiktok fame) that I had to read a romance series about blue alien men. That did not sound like my scene. I’ve enjoyed the vampire, fae, werewolves, and even fallen angels romances. I had yet to venture into space and beyond. Well, Ruby Dixon did not disappoint with Ice Planet Barbarians, the first in a series of 22 books. Wowza!

We begin our story in the perspective a spunky survivor named Georgie. Kidnapped in her sleep, Georgie awakens in a space ship cargo hold with several other terrified women. While it all seems like a big cosmic joke, Georgie doesn’t waste time by disbelieving her own eyes. A fellow hostage confirms the truth of their dire circumstances. The women are being taken to another planet to be sold as either food, or slaves.

At this point, the story was a little strange, and a little bit dark for me.

Despite initial concerns, I was invested in seeing these women to safety. When they end up abandoned on a strange ice planet, I was very curious what the living conditions would be like. Could these weakened women survive without proper food and clothes surrounded by snow? The least-injured Georgie chooses to face the dangerous planet in hopes to save them all. Naturally, this is how she runs into an alien. I’m glad that Dixon wrote the story in alternating perspectives of Georgie and Vektal from that point forward. It was amusing to see how alien her human form was for him.

I’ll keep the rest of Georgie’s mission to save her friends a little vague. She spends the proper amount of time hunting for food and clothes for the women, and balances it with rides on Vektal’s ribbed tongue. Can you imagine?!

I was doubtful of this book keeping my interest, but I ended up finishing it in one sitting because I was that curious about the fate of the human women. It was clear that the male species of the new planet were more than happy to dote on them, but Ruby Dixon managed to give them choice in the end. It’s the choices they make that ultimately open up this series for more stories on the ice planet and probably beyond.

I’m not the only bee who loved Ice Planet Barbarians. Here’s what Jes had to say:

“Ruby Dixon has the perfect blend of sweet, sexy, and enough out of this world strangeness to be completely addictive and totally craveable. There’s a reason it’s taking the romance world by storm! Just like a blue-tinted, spur studded potato chip—I’ll bet you can’t read just one! And have you seen the special edition cover? You’ll want that gorgeous artwork on your shelves!”

Wait With Me by Amy Daws

Baking Me Crazy by Karla Sorensen