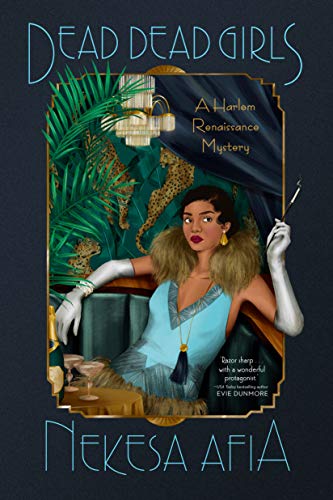 “In this terrific series opener, Afia evokes the women’s lives in all their wayward and beautiful glory, especially the abruptness with which their dreams, hopes and fears cease to exist.”--The New York Times

Following a harrowing kidnapping ordeal when she was in her teens, Louise is doing everything she can to maintain a normal life. She’s succeeding, too. She spends her days working at Maggie’s Café and her nights at the Zodiac, Harlem’s hottest speakeasy. Louise’s friends, especially her girlfriend, Rosa Maria Moreno, might say she’s running from her past and the notoriety that still stalks her, but don’t tell her that.

When a girl turns up dead in front of the café, Louise is forced to confront something she’s been trying to ignore—two other local Black girls have been murdered in the past few weeks. After an altercation with a police officer gets her arrested, Louise is given an ultimatum: She can either help solve the case or wind up in a jail cell. Louise has no choice but to investigate and soon finds herself toe-to-toe with a murderous mastermind hell-bent on taking more lives, maybe even her own....

What I loved about Dead Dead Girls by Nekesa Afia:

The scene settings of secret speak easies during the prohibition era.

A plot that sets a young woman of color as a leader to solve a serial killer mystery.

What didn’t work for me in this story:

Events jumped too quickly from one to the next.

Louise acting as liaison for white cops wasn’t quite believable as written.

Dead Dead Girls by Nekesa Afia is a debut novel, built from a fabulous plot idea.

Unfortunately, it wasn’t effectively executed in my opinion. I skipped through several chapters to read the two ending chapters. It turns out that I had predicted the killer correctly, very early on in the story. I also predicted an important murder. I do believe the author has success ahead of them. This book was just a near miss for me.

Once Upon a Time Travel by Sariah Wilson