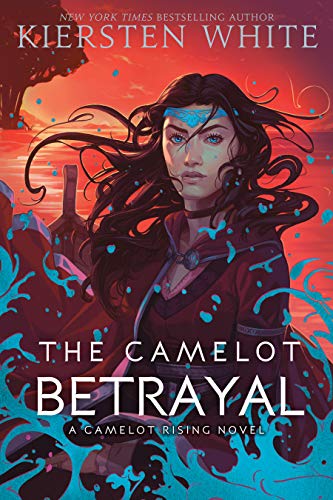 EVERYTHING IS AS IT SHOULD BE IN CAMELOT: King Arthur is expanding his kingdom's influence with Queen Guinevere at his side. Yet every night, dreams of darkness and unknowable power plague her.

Guinevere might have accepted her role, but she still cannot find a place for herself in all of it. The closer she gets to the people around her--Brangien, pining for her lost love Isolde; Lancelot, fighting to prove her worth as Queen's knight; and Arthur, everything to everyone and thus never quite enough for Guinevere--the more she realizes how empty she is. She has no sense of who she truly was before she was Guinevere. The more she tries to claim herself as queen, the more she wonders if Mordred was right: she doesn't belong. She never will.

When a rescue goes awry and results in the death of something precious, a devastated Guinevere returns to Camelot to find the greatest threat yet has arrived. Not in the form of the Dark Queen or an invading army, but in the form of the real Guinevere's younger sister. Is her deception at an end? And who is she really deceiving--Camelot, or herself?

In this second installment of the Camelot Rising series, we again follow Guinevere through her struggle to be protect Camelot. While she still feels like she’s play-acting at being Queen, in this story she actually makes choices and takes much needed actions that only a Queen could handle. She is rightfully paranoid of everyone after she trusted the wrong people before, releasing a great threat to the safety of Camelot. The anxiety of missing magical threats to Camelot, and her desperation to protect her friends undoubtedly lead her into more trouble than if she’d just trust herself.

She will be betrayed once again…

Just as the title suggests, Guinevere is once again betrayed by someone within close company. Kiersten White managed to put me onto the wrong trail for quite a while before I switched tracks and predicted the real wolf in sheep’s clothing. Even so, it bothered me that I couldn’t predict “the why”. I was just as surprised as Guinevere.

One of my favorite characters in this series is Sir Lancelot. Undying loyal, Lancelot gets into quite a bit of trouble because of Guinevere. Lancelot is one of three people that know of the Queen’s magical abilities. Knowing her secret means that there are times when Lancelot must leave Guinevere unprotected. Of course, Guinevere gets hurt or causes hurt for others, and tries to take the blame herself. A constant theme in the story is Guinevere trying to handle problems alone to save her friends. You can’t help but wonder how things could turn out if she didn’t insist on going at things alone so often.

Throughout the story there were several times I was proud of Queen Guinevere. There were many times I thought ‘stop acting like a sad puppy.’ My opinions of her were conflicting but that made her feel all the more real. No human is perfect and I’m sure if I was 17 and a Queen, I’d be worse at the job.

In the end of The Camelot Betrayal we’re left with another surprising cliff hanger. Will Guinevere be the ultimate champion of Camelot, or will Arthur ride in and save the day? Either way, I’m anxious to find it in the next book!