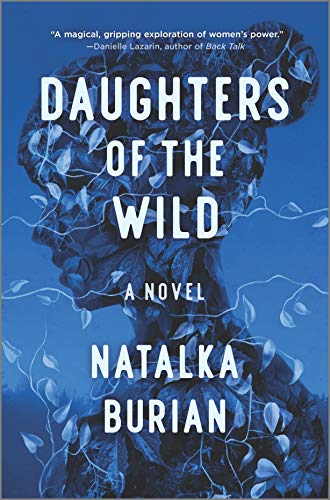 In rural West Virginia, Joanie and her foster siblings live on a farm tending a mysterious plant called the vine. The older girls are responsible for cultivating the vine, performing sacred rituals to make it grow. After Joanie’s arranged marriage goes horribly wrong, leaving her widowed and with a baby, she plots her escape with the help of her foster brother, Cello.

But before they can get away, her baby goes missing and Joanie, desperate to find him, turns to the vine, understanding it to be far more powerful than her siblings realize. She begins performing generations-old rituals to summon the vine’s power and goes on a perilous journey into the wild, pushing the boundaries of her strength and sanity to bring her son home.

Daughters of the Wild is an utterly absorbing debut that explores the female mind in captivity and the ways in which both nature and women fight domination. Like The Bell Jar set in rural Appalachia, Daughters of the Wild introduces a fierce new heroine and a striking new voice in fiction.

I wanted to love this book because it sounded magical and empowering of women.

The idea for this story was solid but not executed as well as it could have been. It’s implied to be about a

magical vine that relies on women for it’s growth. We don’t understand early on what that means of the women tasked with the vine’s upkeep, and after finishing the book it’s still not very clear to me. After a young woman has her cycle, her responsibility to the vine changes with rituals. The ritual is not as detailed as I’d expected from this story. This story is not about the daughters of the family.

Ultimately, this story is about a dysfunctional family living like a cult on a rural farm. Children are placed on the farm by foster care and then grossly mistreated. The story focuses more on a boy named Cello than the daughter named Joanie. In less frequent moments spent in Joanie’s perspective she is intensely focused on using the vine to find her son, this at least was true to the synopsis. Despite all of her time on the vine and pushing her worship of it to her physical limits, I kept trying to understand the “why” of the vine.

More time should be spent in the high-stakes moments of the story.

There are quick and abrupt shifts in the story that needed more time. Cello has a big revelation about himself that occurs way too fast to feel true to the character. When an important character dies, a tense environment suddenly shifts to people just moving around, talking to each other, going inside the house. There’s a disconnect in several important transitions in the story.

It’s my honest opinion that there’s a lot of good ideas woven in this story, it just needed a little more work. I would have liked to see the story from Joanie and Marcela’s points of view. Marcela was a fiery spirit that didn’t enjoy her life on the farm at all. The connection of Cello and Joanie wasn’t relevant enough for me to warrant his point of view.