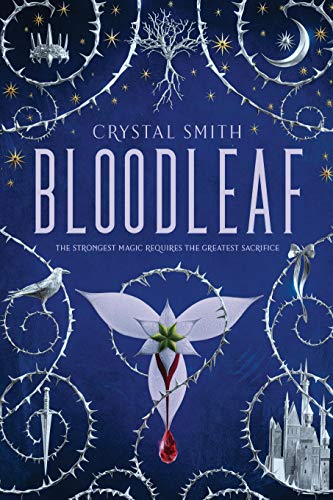 Aurelia is a princess, but they call her a witch.

Surrounded by spirits and burdened with forbidden magic, she lives in constant fear of discovery by the witch-hunting Tribunal and their bloodthirsty mobs. When a devastating assassination attempt reveals her magical abilities, Aurelia is forced to flee her country with nothing but her life.

Alone and adrift in an enemy kingdom, Aurelia plans her revenge against the Tribunal, desperate to bring down the dark organization that has wrought terror upon her people for hundreds of years. But there's something deeply amiss in her new home, too, and soon she finds herself swept into a deadly new mystery with a secretive prince, the ghost of an ancient queen, and a poison vine called Bloodleaf.

Aurelia is entangled in a centuries-long game of love, power, and war, and if she can't break free before the Tribunal makes its last move, she may lose far more than her crown.

In the wake of tragedy, Aurelia keeps moving forward.

Aurelia is the princess of a kingdom rigidly controlled by Tribunal. If someone suggests even for a second that a person is a witch, they’re immediately executed by The Tribunal. Her status as princess is the only reason that she hasn’t been outright accused. Many in her kingdom believe her to be a witch. She’s able to keep her abilities a secret from even her closest friend, but when it reaches the point that she has to flee in the night, Aurelia is left with nothing but her will to survive.

Without revealing too many details, there are several moments in the book that are terribly sad and make you want to throw the book at the wall. Our heroine Aurelia handles these much better than I would. The author Crystal Smith gave us the appropriate amount of sadness to fuel our determination to end the tribunal and everyone loyal to their survival. Aurelia grieves deeply, but doesn’t quit. Even when her survival seems impossible.

Crystal Smith sure paid attention to the details in Bloodleaf. The women are strong willed and powerful. The young men vying for Aurelia are noble and selfless. The story primarily focuses on the tragedies that she’s trying to prevent a her kingdom that she’s trying to save. The famous life saving Bloodleaf can only be harvest once the blood of death has spilled on its vine. Sacrifices have to be made for that kind of magic. Overall, Bloodleaf is a compelling story. Crystal Smith created a very intriguing landscape for the ages old story of forbidden witches. I highly recommend this to all fantasy readers.