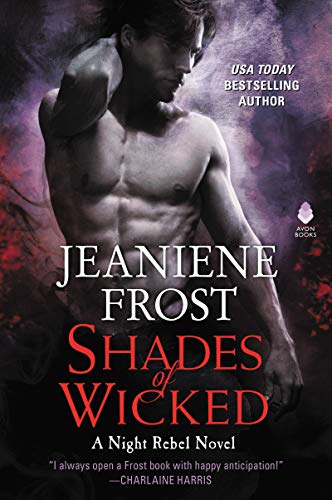 Master vampire Ian is unrepentant, shameless…and every shade of wicked. He’s made one too many enemies in his two centuries of existence, including Dagon, a demon who now lays claim to his soul. Ian’s only chance to escape Dagon is to join forces with a Law Guardian, but he's never been able to abide by the rules for long.

Veritas’ normal role is police, judge, and jury to reprobates like Ian. But she has her own ax to grind with Dagon, so if she can use Ian as bait...well, all’s fair in law and war. As they scour supernatural hotspots to perfect their trap, Veritas soon realizes Ian’s carefully cultivated, devil-may-care roguish image hides something much more powerful. And Ian discovers Veritas has shocking secrets of her own. As they’re drawn to each other with a passion as intense as their peril, either love or justice will prevail. But each will have devastating consequences.

Shades of Wicked is the long anticipated spin-off starring Ian, from Jeaniene Frost’s “Night Huntress Series”. Ian has always been the hilarious, law-breaking, smart-mouthed, self-absorbed side character throughout the Night Huntress world. When Frost began spinning out side stories for our other favorite characters of her world, I knew Ian’s would be the most challenging. There was no way she could find the perfect woman to settle down Ian.

Who’s perfect for a law-breaker? A law guardian for the vampire race.

Veritas, one of the law guardians of the Night Huntress world, has always been a mysterious “waif” of a woman. Small but formidable, Veritas always upheld the laws of her kind despite the hints that she might have her own law-bending secrets. It’s easy to assume why she desperately needs Ian’s help, and he’s so cocky that he thinks he knows too. Her secrets are spilled slowly over the course of the story.

Frost delivered just what her readers needed; just enough of the reckless personality we’ve come to love from Ian with the right mix of fierce loyalty that makes us swoon.

Ian and Veritas spring into action against their common enemy almost immediately. After settling the terms of their temporary partnership, their sizzling attraction follows closely thereafter. Like all of the heroines of the Night Huntress world, Veritas didn’t stand a chance against her attraction. When your partner can please all of your nerve-endings in mid-air, how do you resist?

Hands-down, no one writes a better vampire lover than Jeaniene Frost.