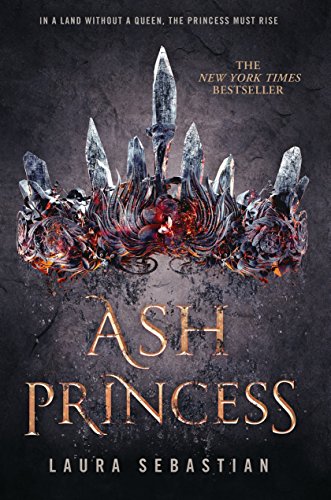 Theodosia was six when her country was invaded and her mother, the Fire Queen, was murdered before her eyes. On that day, the Kaiser took Theodosia's family, her land, and her name. Theo was crowned Ash Princess--a title of shame to bear in her new life as a prisoner.

For ten years Theo has been a captive in her own palace. She's endured the relentless abuse and ridicule of the Kaiser and his court. She is powerless, surviving in her new world only by burying the girl she was deep inside.

Then, one night, the Kaiser forces her to do the unthinkable. With blood on her hands and all hope of reclaiming her throne lost, she realizes that surviving is no longer enough. But she does have a weapon: her mind is sharper than any sword. And power isn't always won on the battlefield.

For ten years, the Ash Princess has seen her land pillaged and her people enslaved. That all ends here.

"Sure to be one of the summer's most talked about YAs. . . . A darkly enchanting page-turner you won't be able to put down."-Bustle

The cover of Ash Princess by Laura Sebastian is stunning. My 12-year-old has recently become a bookworm so we took a trip to Powell’s City of Books. The book store occupies a full city-block and offers more books than you can imagine. Ash Princess has the type of cover art that stands out on a jam packed shelf of books. I grabbed it for her, but I was not prepared for how much I would love the book myself.

The life of Theodosia is full of tragedy from the very first page. Following the murder of her mother, she is renamed Thora. She is forced to deny her true identity and live among the people who conquered her home and stole her queendom, the Kalovaxians. Her existence as a pretend Kalovaxian is truly despicable and it leaves the reader questioning how this story could possibly end well for Thora and her enslaved people.

Thora’s life among the Kalovaxians is a miserable shadow of existence. She is physically punished everytime there is any resistance or rebellion from the enslaved Astreans. The Kaiser forces her to wear dresses that display her scars for all to see. She is allowed to interact with others, as she is supposed to be a docile Kalovaxian citizen but, they are always watching her. She is never truly alone.

The ashes, they all fall down.

Cresentia is Thora’s only friend; however, throughout their interactions it’s clear the friendship is both a blessing and a curse. Cresentia was kind to Thora from the first time she was forced to wear a crown made of ashes. At all social functions, Thora is made to wear a crown of ash so that it flakes and falls with her movements. Covering her in ash and mocking her former station as a princess of Astrea.

The Kaiser thinks to break her, and unintentionally sparks the rebellion inside of her.

Thora’s identity was always a show. She reminded herself how Thora is expected to act, what she would say, how she should feel. The moment she decides to fight for her county she shifts mentally to Theodosia. Years of abuse keep her insecure and questioning all of her plans. Her fight to redeem herself as Queen Theodosia is made more authentic this way. Readers might prefer her to be a tough and defiant woman instantly, but the truth is that she was tortured from her childhood. Fighting back against any abuser, and in this case a whole country, is not done easily.

Ash Princess provides plenty of surprises to keep the pages turning. Her best friend is an enemy to her country. If she overthrew the Kalovaxians, how could she spare her friend? Theodosia wants to hurt the man who killed her mother; however, he’s Cresentia’s father. Can she kill the father of her only friend? Throughout Ash Princess, taking back Astrea seems an impossible feat. A vast majority of the Astreans were murdered while the rest are enslaved in the mines. From embers and ashes, Theodosia will rise against them.