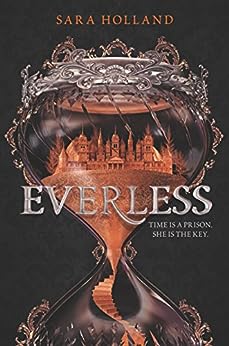 In the kingdom of Sempera, time is currency—extracted from blood, bound to iron, and consumed to add time to one’s own lifespan. The rich aristocracy, like the Gerlings, tax the poor to the hilt, extending their own lives by centuries.

No one resents the Gerlings more than Jules Ember. A decade ago, she and her father were servants at Everless, the Gerlings’ palatial estate, until a fateful accident forced them to flee in the dead of night. When Jules discovers that her father is dying, she knows that she must return to Everless to earn more time for him before she loses him forever.

But going back to Everless brings more danger—and temptation—than Jules could have ever imagined. Soon she’s caught in a tangle of violent secrets and finds her heart torn between two people she thought she’d never see again. Her decisions have the power to change her fate—and the fate of time itself.

According to my own tween, Everless by Sara Holland is a great read for a mother/daughter bookclub.

The people of Sempera survive on the blood of the less fortunate in their society. We’re not talking vampires. Because of an ancient spat between an Alchemist and a Sorceress, the life expectancy of a Semperan citizen depends on how well they “spend” their life blood. Days, months, and years of time are drawn from a person’s blood and bound into a coin. The coins are dropped into drinks and extend the life of the more fortunate drinker. It pays rent, it buys food, and it is drawn in large quantities as punishments for crimes.

In Everless, we witness the vast difference between the poor working class and the aristocracy. Where our main character Jules Ember is desperate to earn back the years her father has had to sacrifice for their meager living, people like the Gerlings are frivolous with their wealth earned from the life blood of those they tax so harshly.

In a last ditch effort to provide for herself and her withering father, Jules joins the influx of servants at the Everless Estate. Roan Gerling is soon to marry the Princess of Sempera and the Estate needs many people to prep the wedding. Immediately her presence causes trouble for herself and those around her. She promised her father she’d never return to Everless, the home of her childhood, her first love Roan Gerling, and his cruel brother Liam Gerling.

If you see Liam Gerling, run away. Leave Everless. Stay far away from the Queen.

As you can expect from a seventeen year old girl, Jules is drawn to do the opposite of what her father begs her to do. She can’t believe she’s in any danger from the Queen because her father won’t tell her why. She knows she should avoid Liam; however, she needs to know what trouble he’s up to. What secrets is he keeping in that journal, and is he a danger to his brother Roan?

Jules will take great risks to get to know the Queen of Sempera, as well as her adopted daughter that is soon to marry Roan. Sara Holland’s debut novel might have a few twists you’ll see coming but you will definitely be surprised by Jules’ connection to the Queen, and the dramatic ending to this first installment.