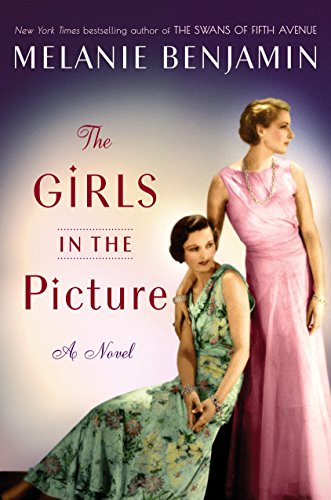 It is 1914, and twenty-five-year-old Frances Marion has left her (second) husband and her Northern California home for the lure of Los Angeles, where she is determined to live independently as an artist. But the word on everyone’s lips these days is “flickers”—the silent moving pictures enthralling theatergoers. Turn any corner in this burgeoning town and you’ll find made-up actors running around, as a movie camera captures it all.

In this fledgling industry, Frances finds her true calling: writing stories for this wondrous new medium. She also makes the acquaintance of actress Mary Pickford, whose signature golden curls and lively spirit have earned her the title “America’s Sweetheart.” The two ambitious young women hit it off instantly, their kinship fomented by their mutual fever to create, to move audiences to a frenzy, to start a revolution.

But their ambitions are challenged by both the men around them and the limitations imposed on their gender—and their astronomical success could come at a price. As Mary, the world’s highest paid and most beloved actress, struggles to live her life under the spotlight, she also wonders if it is possible to find love, even with the dashing actor Douglas Fairbanks. Frances, too, longs to share her life with someone. As in any good Hollywood story, dramas will play out, personalities will clash, and even the deepest friendships might be shattered.

With cameos from such notables as Charlie Chaplin, Louis B. Mayer, Rudolph Valentino, and Lillian Gish, The Girls in the Picture is, at its heart, a story of friendship and forgiveness. Melanie Benjamin perfectly captures the dawn of a glittering new era—its myths and icons, its possibilities and potential, and its seduction and heartbreak.

The Girls in the Picture tells the story of Hollywood’s first movie stars and screen writers. Before reading this book I hadn’t considered how Hollywood got its start. I didn’t know the first silent films were shot quickly without permission in front of churches and businesses. Many people in LA discriminated against people associated with movies. It was a shameful new thing to be part of apparently. Despite the naysayers, two women managed to be wildly successful in a man’s world.

I hadn’t heard the names Mary Pickford and Frances Marion before this book. I now realize that I have them to thank for opening doors for women in the industry. It was no easy feat. Men wanted them to fail at every turn. Many resented them. As a team, they faced off against these men. The were determined to have careers even if it was too absurd for these men to understand.

Tragic and unfair, Mary Pickford began acting at the age of 8. Her father had died, leaving her behind with her mom and two siblings. As the eldest sibling, she became the bread winner. Earning just enough money to feed and clothe them all. Deprived of a normal childhood, Mary would later become famous for her brilliance in portraying a child in the movies.

Frances Marion would become the highest paid “scenarist” in the business, and the first to win two Academy Awards. Mary undoubtedly gave Frances her break into Hollywood, but Frances would build her career through her own talent as a writer. She was so rare, the first female to direct a film, that many simply couldn’t believe it at all. Why wasn’t she home knitting or doing something else useful?

Both women would have several marriages. It is arguable that a lot of the reason Mary was able to challenge men in her career was because her marriage protected her. It wasn’t a secret that women were expected to lay on casting couches to earn a role in the movies. As a married woman, a good-girl, she didn’t have to make those choices to further her career.

“I’d seen the way men in power treated actresses; it wasn’t an equal relationship at all, and if you were ambitious, there were many unsavory choices you would have to make.”

Our recent #timesup movement began after a very public exposure of this dirty “secret”. Women’s rights have come so far from the times of Mary and Frances that all of us wanted to believe that women in Hollywood were equal to the men. We wanted to think that the actresses we know and love today didn’t suffer harassment from men in power. Yet, we now know that they did of course. Most of us assumed it happened behind the scenes, but hoped that it didn’t.

Early Hollywood doesn’t sound much different from what we’re hearing today in the media as actresses and even some actors tell their personal stories of harassment and assault. The distinguishable difference is that we now live in a time where these actions are illegal and punishable. Women are powerful enough to speak out about how they’ve been mistreated and enough people in power care. There is legal action that can and has been enforced. Hopefully men will no longer be able to manipulate women and their careers for their own pleasure.

Melanie Benjamin took true historical information and created a dialogue for Mary and Frances. The conversations and events throughout the book all ring true. They all felt authentic. We will never know their actual conversations and motivations, but Melanie Benjamin was very imaginative. I feel she was successful at bringing these two women to life, and did their stories justice.

I’ll admit that it took me a long while to read The Girls in the Picture. At times it felt drawn out. I was often angry that Frances didn’t speak out to Mary when she should have. I was definitely furious that Mary was missing from Frances’ life at the moments she needed Mary most. We can’t know for certain that it happened that way in real-life; however, I would have liked it if Melanie Benjamin had believed that Frances deserved at least one moment. There were times in their older years when Mary was cruel to Frances and yet Frances allowed it all. She came back to Mary whenever she was called without even talking about their problems. I’d have liked Frances to knock Mary down a few pegs.

I understand why some readers commented that they wished the story ended before their careers dipped and the industry turned them into relics. Of course we all want that glorious happy ending for them. Instead, Melanie took us well past their career heyday and into their senior citizenship. This felt more authentic. Real life isn’t what we see in movies. It isn’t like most of the fiction we read. Real life has both joy, heart break, and doesn’t guarantee us a happy ending. Melanie Benjamin told an important true story with just the right amount of happy fiction mixed with enough realistic disappointment to bring The Girls in the Picture to life.