Once Upon a Time Travel by Sariah Wilson 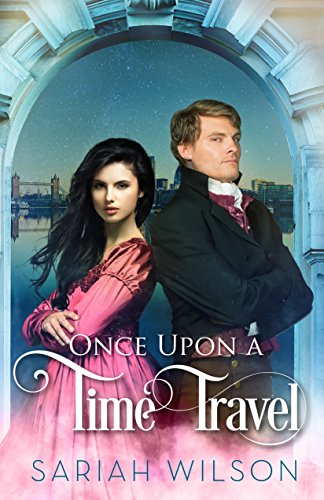 Once upon a time…

Recent college grad Emma Damon knows the Rose Room in Hartley Hall is off limits, which is exactly why she can’t wait to get inside. Once she enters the forbidden room, Emma learns more about the history of the museum than she ever intended to know.

Waking up confused and shocked in 1816, all Emma wants is to return to her cozy home with flushing toilets and disposable razors. But when she’s mistaken for someone else, Emma must pretend to be everything she’s not. About to be engaged to the Earl of Hartley’s brother, Emma fails miserably at playing the role of a sophisticated lady.

Hartley is determined to ensure that the quirky and adorable woman marries his brother – despite his ever-growing attraction to her. After loving and losing, he refuses to fall prey to the shackles of love. But as his desire for Emma increases, he knows he must forfeit his happiness for his brother’s future. After all, there’s no such thing as happily ever after.

When Emma wakes up in 1816 with her smartphone in her jeans pocket, she doesn’t believe she’s truly traveled in time. She tells herself that she must be dreaming. She amuses herself with silly responses to the questions she is asked by the house staff and the handsome Earl Hartley. Soon Emma is taken to a place where she can rest and reorient her confused mind. She peacefully dozes off expecting to wake from her bizarre dream. When she wakes in the same room in 1816, she quickly realizes she must have truly traveld in time. She must play the part of a lady who belongs in this time period. If she were discovered, where would she go?

The ability to breathe is way overrated. I don’t know what would feel more torturous, the loss of regular breathing from having to wear a corset, or possessing a smartphone I could no longer utilize. Imagine, holding your phone that could instantly find anything you could ever want and yet you’ll never again have service, internet, nor a cord to keep it charged. It’s going to die forever!

Needless to say, Once Upon a Time Travel is the telling of a girl forced to learn to adjust to the time period. It’s more difficult than it sounds. Simple things we are accustomed to saying don’t make sense to the people around her. She doesn’t know the etiquette required for the different classes of people, she hasn’t learned the dances of the time period, and she must remember that she can’t be in the presence of Hartley without her chaperone. It would compromise her and they’d be forced to wed.

According to Emma, Hartley is hot. When he’s told this he is confused by Emma’s reference to the temperature. I enjoyed all of their conversations because of the innocent misunderstandings due to their differences in speech. A lot of what Emma says and does gets blamed on the quirkiness of Americans. Including how differently we dance which sparks a bit of desire in the Earl.

Emma & Hartley kept me up most of the night

Hartley is desperate to stop thinking about Emma romantically and marry her off to his brother, while Emma is torn between her love for Harley and her desperation to find her way back to 2017. If Hartley could admit to her and himself that he wants Emma to himself, would his love be enough to keep her happy in 1816?

The idea of leaving my life in 2017 for the love of a man in 1816 seems so baffling. This is mostly why I couldn’t stop reading about Emma and Hartley. Don’t get me wrong, I’m madly in love with my own husband. I’m just wondering if I could stand the loss of modern technology and the advancement of women’s rights to be with him. Then again, we are an interracial couple so our story of love would be MUCH different and quite illegal. I’ll stick to 2017! 🙂

Under Glass and Stone by A.N. Willis

Built to Last by Erin Hahn