Lucia Vega is on a winning streak.
Her book, Throw Away the Key has taken the country by storm.
And now it’s being made into a movie.
After years of chasing it, she can finally taste freedom.

Reece Carras is one of the most powerful men in Hollywood.
Handsome, rich and generous, he’s everything girls like her aren’t supposed to dream of.
But dream she does. And in his strong arms she finds a freedom she never even knew existed.

Falling in love is the easy part…
Cruel twists of fate and torn loyalties will make staying together seem impossible.
Sacrifices will have to be made.
And they will learn that blood may be thicker than water,
But nothing is more powerful than two hearts that beat for each other.

I can not write this review without tearing up. There are some who will not like this book because of it’s content. And there will somewho will vilify this author because she dared to write a story about a topic she feels deeply about. I am not one of those people. I am incredibly proud of Dylan Allen for being brave enough to intertwine a love story with an issue that is so incredibly important in our country, and world, today.

Lucia Vega is a figment. She is a pen name, an LLC and the author of the incredibly successful story, Throw Away the Key. The woman behind the facade is Ana Maria de la Vega Rios, a twenty three year old undocumented alien, living life under the radar. In America since she was two years old, she has kept her head down for her entire existence, until now. Her book, sold as a work of fiction, has topped the bestseller charts, and she has been tapped to write the screenplay to turn it into a movie.

Reece Carras is Hollywood’s golden boy. A former Olympic swimming champion, Reece now heads the incredibly successful family film production company, Artemis. And at his urging, the company has now optioned Lucia’s book for a major motion picture. But from the moment Reece meets Lucia, he is captivated by much more than her story, he is enthralled by the person, the mystery that she is. 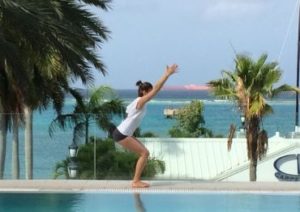 Sparks fly between the two at their every meeting, but both know they are treading in dangerous waters. They agree to be friends while the screenplay is being written. Lucia will teach Reece yoga, and Reece will coach her to learn how to swim. But, eventually, they are unable to keep their passion in check. However, both are hiding secrets- life-altering secrets. When what they have been hiding is revealed, they will have to redefine their lives as they know them. Lucia will need to draw upon the strength of friends and family to find forgiveness. And Reece will have to reset his priorities and future goals to adjust for Lucia’s DREAMER status.

This book will give you the feels that many a romance novel does. And you’ll swoon and sigh at Reece’s devotion to Lucia. And you’ll cry and fret when they run into the inevitable crises that any couple does. But then you will realize that the issues Lucia and Reece face, are not those of your average love story. And hopefully, just maybe, you’ll walk away from this book at the very least curious about those issues, and at best motivated to see what role you can play in their solution.

I applaud Dylan Allen’s courage for writing a romance novel that crosses the line into relevant politics. Through a slow burning story of love in present times, Dylan familiarizes us all with the struggle of the DREAMERs and tackles head-on a political issue that can not be swept under the rug. I would give this book 5 stars for the story and Dylan 10 for her bravery.

Jodi
Jodi is a former elementary school teacher/curriculum writer turned SAHM. She lives in NH and has three girls ages 8, 6 and 3. Every day is a chaotic surprise in her house and reading is her stress reliever/escape hatch. She has enjoyed reading since she was very little, and loves a wide variety of genres, including everything from classics like Anna Karenina and Pride and Prejudice to sexy, smutty romance. She also enjoys coffee, chocolate, and wine, in that order throughout the day, and is very content any time she can go to the bathroom alone.
Prev Article Next Article