The Book of Whispers by Kimberley Starr

Tuscany, 1096 AD. Luca, young heir to the title of Conte de Falconi, sees demons. Since no one else can see them, Luca must keep quiet about what he sees, or risk another exorcism by the nefarious priest Ramberti. Luca also has dreams—dreams that sometimes predict the future. Night after night Luca sees his father murdered, and vows to stop it coming true. Even if he has to go against his father's wishes and follow him on the great pilgrimage to capture the Holy Lands.

Far away in Cappadocia, Suzan has dreams too. Consigned with her mute mother to a life in an underground convent, she has a vision of a brown-haired boy riding through the desert. A boy with an ancient book that holds some inscrutable power. A boy who will take her on an adventure that will lead to places beyond both their understanding. Together, Luca and Suzan will realise their true quest: to defeat the forces of man and demon that wish to destroy the world.

A Book of Whispers About How to Save the World

The Book of Whispers is a difficult book to describe, and to review. It is a sweeping story, spanning the medieval world from sun-drenched Italian olive farms, to the scorched deserts of the Middle East. It follows the exploits of Luca, a young knight on Crusade, as he discovers that perhaps the Saracens are not the evil scourge they are thought to be, and that his fellow Christians can be as just as depraved in battle and conquest as he expecst his enemy to be. Added to the moralistic back story, is the fictional ingredient of a demonic plot to overtake the earth and possess man-kind, which can only be thwarted by following the advice contained in a family heirloom, the Book of Whispers. 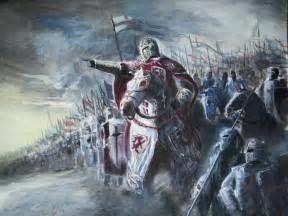 Enter the enigmatic Suzan, the only person who is able to read the book, since she grew up in a remote convent, and was taught the language by her mysterious (and mute) mother. And while these various ingredients may seem somewhat random, Kimberly Starr blends them together masterfully into a very special story.

The Book of Whispers does an excellent job of piquing a reader’s interest in the historical aspects of the Crusades, while also building in a  nail-biting tale of demon hunting. Luca, the hero of the story, can see demons everywhere, and has even suffered through an exorcism as a child in an attempt to cure him of what was seen as a terrible affliction. For people of that time period, the workings of Satan and his minions were very real forces in the every-day physical world, but to admit that one could see them often carried a penalty of death. Along with his curse of seeing demons, Luca also sees the future in his dreams, which is what leads him on the Crusade in the first place, in an attempt to save his father. Along the way, he meets Suzan, who has also seen him in her dreams. They will become allies and love interests… and although their romance remains chaste and innocent, I found myself really rooting for them almost immediately. They are both very likeable, and very tortured by their circumstances, even as their chemistry leaps off the page.

At 400 pages this book is a bit of an undertaking, but it is one that I would highly recommend! It has history, romance, action, and paranormal elements, making it a thought provoking crowd pleaser and great conversation piece.

Happily This Christmas by Susan Mallery

Lily and the Octopus by Steven Rowley

When Wishes Bleed by Casey Bond