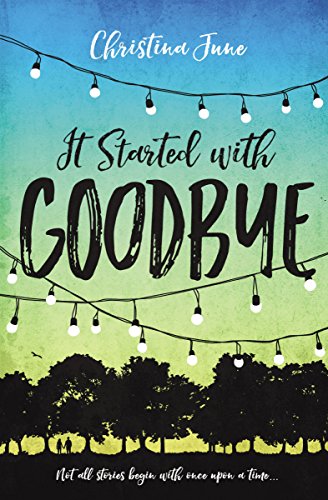 It Started with Goodbye
Christina June
Young Adult Fiction
May 9, 2017
272

Sixteen-year-old Tatum Elsea is settling in for the worst summer on record. After she's unfairly implicated in one of her best friend's ideas gone awry, Tatum's stepmother places her under virtual house arrest. But to Tatum's surprise, her summer doesn't turn out to be all bad. And things really begin to look up when she starts her own graphic design business and meets a cello-playing client, Seamus. If Tatum is reading his emails right, Seamus is funny, smart, and talented--and he seems to think the same about her. Too bad he's spending his summer across the ocean in Ireland...not that Tatum would be allowed to go on a date anyway. But over the course of the summer, Tatum will learn that sometimes going after what you want means breaking the rules. In the process, she'll discover things about her friends, her family, and herself that she never could have guessed. And when Seamus turns out to be closer than she thought, she might just get a perfect kiss in the bargain. A modern play on the Cinderella story arc, Christina June's It Started with Good-bye will appeal to fans of Sarah Dessen, Stephanie Perkins, and Jennifer E. Smith.

It Started With Goodbye tells the “Cinderella” story of a girl named Tatum who is grounded all summer for an unfortunate situation that happened between her best friend and her best friend’s boyfriend. She played an unknowing part in a crime and had to pay a hefty fine and community service for her trouble. Like a Cinderella story, she has a step-mother whom she calls her “step-monster”. Her step-sister is quiet and cold to Tatum. So naturally she feels isolated regularly except her new punishment has heightened that feeling. The role of “fairy godmother” is played by Tatum’s step-grandma who is staying for the summer to help monitor Tatum’s daily actions while her dad is out of the country.

She sends a lot of emails with people over the summer, including her mystery “prince” named SK, and each time this happens we aren’t alerted to the switch between email and story line. This might seem minor but it really interrupted the flow of reading the story. A different font, or italics would have been nice here. I was a little surprised that we didn’t see more text message dialogue in this story of teenage juniors in high school.

The story is fairly predictable. 🙁

Once you tell someone it will be a Cinderella story you pick up on who is who in the story very fast. It isn’t hard to determine who in her family also has a secret. Also too easy to guess what the secret would be. The mystery boy “SK” was an obvious one. I know that was a little unavoidable in a book. It was also obvious as soon as she lost her key chain (the glass slipper in this case) that she would be getting it back in the end of the story, as well as how it would be returned to her.

I enjoyed following Tatum around through her troubled summer. I related to her days of manual labor because I spent one day at a wildlife reserve pulling plants for a college project requirement. The one day was enough, so I sympathized with her story of a whole summer in this labor. The moment she meets SK is sweet and just the right level of teen summer romance. I could remember being a teen and that innocent fun when getting to know your crush. That is about where I started to lose interest though. Being a mother myself, I didn’t believe the makeup moment between Tatum and her dad. Without revealing the story, I’ll say that it didn’t feel realistic in the way it happened. Also unrealistic (in my opinion) was the turnaround of the step-monster. It was too much and too quickly for a real person. Overall, the adults and their methods of parenting just weren’t quite realistic to me. Perhaps I need to broaden my parenting horizons. 🙂

All in all, a good read for the teenage audience.

I think they could relate to Tatum and her angst. I’m sure several teens will identify with her. Hopefully they’ll appreciate her growth and maturity toward the end of the story.

Kristin
Kristin lives in the PNW with her husband, and three kids. She loves to read YA fiction, fantasy, and romance. She's recently entered the world of "Booktok" on Tiktok, and is having way too much fun following the trends of young folks. The only shows she watches are re-runs, and if she's not reading a book she's listening to one.
Prev Article Next Article