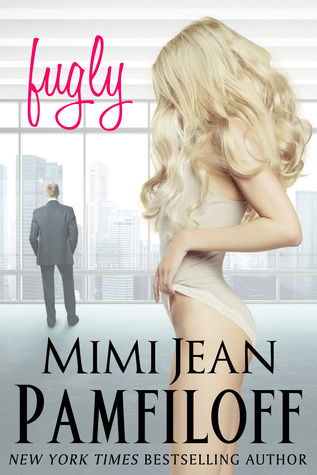 UGLY IS IN THE EYE OF THE BEHOLDER...
My name is Lily Snow. I am twenty-five years old, and despite being born with an unattractive face, I have never doubted who I am: smart, driven, and beautiful on the inside.

Until I met Maxwell Cole.

He's handsome, excessively wealthy, and the owner of Cole Cosmetics. It's been my dream to work for this man for as long as I can remember. The good news is he wants to hire me. The bad news is he wants me for all the wrong reasons. Ugly reasons.

In exchange, he's offered me my dreams on a silver platter. The job. The title. A beautiful future. But this man is as messed up and ugly as they come on the inside. I'm not sure anyone can help him, and he just might take my heart down with him.
(STAND ALONE NOVEL- MATURE AUDIENCES ONLY)

I have never read anything by  Mimi Jean Pamfiloff  before, and Fugly was interesting, to say the least. It’s a book about a guy named Max who owns a beauty empire and is gorgeous and perfect except for a small little phobia. He has a fear of ugly things.   Lilly is a smart girl who goes for a job and is more than qualified but she apparently has a face that’s not so easy on the eyes so Max, of course, runs the other way. Lilly is strong willed and makes him change his mind.

This leads to a very interesting situation where Max wants Lily to help him overcome his fear of ugly things and of course they fall in love and happily ever after.

It’s hard to separate what I liked and disliked about the book because they intertwine. I loved and
hated Lily.  she was so strong willed and loving of herself one minute but the next lets Max insult her all the time and is too forgiving, which leads me to think that she does not love herself as much as I thought. Lily’s character made it really hard for me to connect with the book like I wanted to.  And she did way to much of the chasing.

Max is the only thing I can clearly say I didn’t like about it. I can appreciate him wanting to get

better and being able to see someone for more than looks but in the beginning, he had her agree to his ugly phobia therapy without telling her that someone else knew about them and she would be put all over the news. He also likes to make her take the blame for things throughout the story most of the time he looks like a jerk with only a few times where he has a redeeming moment but I did not feel like that was enough.

Fugly did give me a new look on self-acceptance.  Even the most confident people have insecurities sometimes. Especially if a hot sexy CEO takes an interest in you, usually nothing he says will make you feel confident in your relationship (at least in the beginning).

Yea it was okay it was different, unpredictable and gave me all the sexy bits I want in a romance story. So if you have a free moment Fugly is worth a quick read.

Ashley
Ashley is a wife and mother who has a wicked case of insomnia. She spends most of the wee hours of the morning reading, playing video games or wandering social media.
Prev Article Next Article